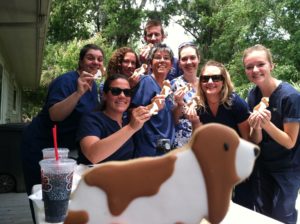 Yesterday, I got diarrhea in my mouth. And in my eye, on my face, my arms, my scrubs. It was everywhere. On the fluid lines, in the kennel, on about twenty towels and blankets, and (somehow) on two separate rubber mats. It was sticky and chunky and bloody and smelled absolutely horrible.

This is not a profession for the squeamish, or the faint of heart. Poor Jackson, the dog responsible for the epic blow-out poop episode, is being euthanized today. He is a fourteen-year-old Lab, and his health has steadily declined in the last few weeks. Now he is in renal failure. We have known Jackson for years. We have coaxed him into eating cookies, poked him with a million needles, apologized to him a million times for poking him with a million needles, petted him, restrained him, collected blood, stool, and urine samples from him, prescribed a million medications for him, treated his arthritic joints with acupuncture and lasers. He is part of our family, and he is dying. Every patient’s death is a sad occasion, but some are sadder than others. If you stay in this job long enough, every patient you grow to love, dies.

Yesterday, we met Otis. Otis is an eight-week-old Basset Hound puppy. His owners found him through a series of coincidences they found too powerful to ignore. They were still grieving the loss of their beloved Gus. That’s Gus, top left, immortalized in cookie form. Those are bespoke cookies from a specialty bakery in California. In his decade or so on earth, Gus survived a GDV, a splenectomy, anal gland ablation, and one form of cancer, before succumbing to a second form. Gus’ owners could almost certainly have bought a second house with the money they spent on Gus’ care and treatments. But he was more important to them. They never said, He’s just a dog. He was their baby. He became our baby, too. The day we euthanized Gus, there was not a dry eye anywhere in an area of 5,000 square feet. But now we have met Otis, whose ears are so long, he steps on them as he walks. Will he grow into those ears? We can’t wait to watch him grow up.

Yesterday, I laughed with some of our patients’ owners, called with advice on how to best battle home flea infestations, took histories on their pets’ recent health, explained surgical procedures and the safety measures we take, listened to their concerns over anesthesia, assuaged their fears as best I could without guarantees, discussed the costs of surgical procedures, and scheduled everything from nail trims to dentistries and mass removals.

This is not a profession for people who don’t like people, and think working with animals will be easier. The animals, sadly, can’t drive, can’t tell you what’s wrong, and can’t pay for their own care. “Must love dogs” is a good qualifier, but to make veterinary medicine the right choice for you, you must love humans. And that can be pretty difficult. Sometimes your love for animals has to sustain you after owners have yelled at you, insulted you, been condescending, or just plain rude. You will be in situations where the owner who drives a Mercedes SUV and wears a rock the size of a grapefruit will be appalled by the $285 dentistry estimate. You will also see situations where the owner who has been out of work for a year and a half will go pawn their only valuable possession to make sure his pet gets medications it needs. You will see the owner who doesn’t sleep because she is giving medications around the clock. You will see the best and the worst of human nature. The good news is that you will find that there is a lot more of the good than the bad. You learn as much about human psychology as you do about animal psychology.

Yesterday, I learned how to get a bowl in and out of an aggressive bird’s cage without getting bitten. I have been learning about cats and dogs for twelve years now, and now we have started seeing birds at our practice. There is always, always, ALWAYS something new to learn. If you love to learn new things, and you don’t mind the ‘feeling stupid’ part of the learning curve, and most of all, if you can easily say the words, “I don’t know,” you will love this job. The more you know, the more you will realize is out there to know. It can be overwhelming. It’s also a lot of fun.

Yesterday, two doctors and four technicians got enough of a lunch break to go eat sushi together. We talked about everything under the sun and stuffed ourselves with sushi and everybody picked off of everyone else’s plate. We are a family. There is something about everything we go through together that builds a family. Stabilizing an emergency, trying to see all of our appointments when three people have called in sick, catching a renegade aggressive cat that has stuffed itself under the recovery cage, crying together over a euthanasia, getting through a four-hour surgical procedure, rejoicing when a pet who has been close to death is back to running around like a puppy. And even though we are an admittedly dysfunctional family, we have each others’ backs. We have to. Or someone gets bit.

Yesterday was a pretty ordinary day.

But if you want to know what it’s like, this is it.